Event
In the epic saga about the heroes and dragons of Skyrim, there are many advantages - deep dungeons, interesting adventures, a rich world. That's just a balanced balance there is not even close. But this is a tradition in the games of The Elder Scrolls series - they always reveal completely legal ways to make a real superhero out of a character. Read how this is done in Skyrim and which armor to choose, skyrim heavy or light armor, read in this article. TES traditions are very peculiar. There were always enough holes in the balance there. Many of you remember how in Oblivion any character could speak armor to complete invisibility, and Morrowind alchemists, enhancing intelligence, created potions of divine power. In Skyrim, as in Morrowind, there were similar ways to circumvent the limitations of developers. However, we are more interested in the capabilities of a hero developed in an honest, and only honest, way. They are pretty “modest": Blows to thousands of HP. Complete invulnerability to magic. The maximum possible armor. This is enough to pass the game at any level of difficulty without any problems. In general, if you try hard (potions, orcish talents, secrecy, and so on), you can make it possible to blow twenty-thirty thousand HP to the enemy with one blow. But this is already a lesson for fans who need the process and the ability to take five hundred percent of the health of the dragon with one blow. As for magic, here, having contrived, you can reduce the incoming damage to almost zero. But to reduce to such numbers physical damage, alas, will not work - even the most well-equipped and charmed to the teeth of the hero enemies can pick up in close combat or shoot from a bow.

ORMA is committed to respond to the cultural and social needs of the Malayalee community and to come together and rejoice in a faraway land. Our programs are attended by a wide spectrum of the community and give an opportunity for families to mingle and express their artistic talents. This keeps alive a strong bond with our motherland.

The two major annual programs we conduct are:

Onam celebrations in September featuring cultural programs reminiscent of Kerala’s rich cultural and artistic values followed by the traditional sumptuous Onasadhya – the most delicious part of the grand festival.

Christmas celebrations in December comprising a vast array of cultural programs accompanied by a splendid dinner.

ORMA also conducts soccer tournaments as a great way to channel the energy and sprit of youngsters of the community in a positive and competitive manner. 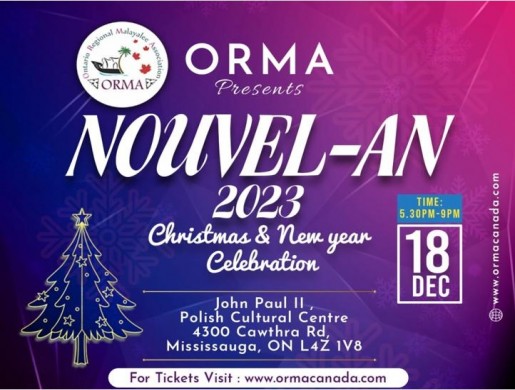